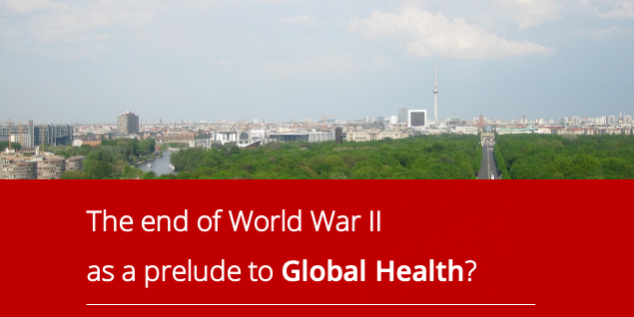 On May 8, 1945, the fever broke. The end of World War II as a prelude to global health?
by Ole Döring

May 8, 2020 marks the 75th anniversary of the surrender of the German Wehrmacht. This date marks the end of the Second World War in Europe and is celebrated as a symbolic day of liberation from National Socialism. The holiday is to be held in Berlin, and only once. This is a very special, unique occasion to talk about health, responsibility and conscience in the light of humanity.

For Europe and the transatlantic world, decades of peace, prosperity, and stability began after the epicrisis. They brought opportunities to build a healthy society, incrementally from the ground up. For East Asia, the nuclear attack on Japan marked the transition of classic colonialism into the Cold War and the Pax Americana, which then dominated until the turn of the millennium. In the East, the Second World War did not end until September 3, 1945. Health then played a role just as much as it was needed for security, order and productivity. Large parts of the world, such as African or Central Asian countries, have not been included in these half-privileges, or only sporadically. It is only for a decade that China’s „Belt One Road“ has emerged as a real geostrategic power with the aim of reshaping the world order from a different cultural approach.

For Germany, May 8, 1945, brought a great, undeserved gift: the Basic Law was launched. This grand piece of constitutional culture obliges the state to subordinate everything to dignity. As the President of the Bundestag Wolfgang Schäuble recently had to remind us: „If there is any absolute value in our Basic Law, it is the dignity of man. It’s inviolable.“ This dignity is that of humans, not that of the rich European men or the privileged American women, not that of office or success. Germany owes every person worldwide that we subordinate all other purposes to this good, including profit, lifespan, party interests or the pursuit of self-realization. It is a good thing that the World Health Organization defines „health“ as a holistic good: it includes the indefinable subjectivity of the individual in his social embedding. Therefore, it can never be standardized, captured and fulfilled by technology, medicine or metrics alone, fundamentally. It lies in the inner value of the quality of good livelihood.

The United Nations‘ agreement on a common comprehensive agenda of the 2015 Sustainable Development Goals (SDGs) is also a major step forward. It is ethically directly connected to the 1948 Universal Declaration of Human Rights, the first full commitment of the world community – formulated at the time with the participation of lawyers and philosophers from China, Canada and France. However, the need for such target agreements as the SDGs demonstrates the weaknesses and shortcomings of global realities that we have allowed to establish since then. In ever-new refinements and clarifications, not only the priorities of this canon of objectives are being renegotiated politically. In doing so, insights into the existential challenges from pathogenic behavioral patterns such as environmental destruction and economic mis-incentives are incorporated into the knowledge of interpretation. The world is getting round, revealing connections between deep sea and deserts, urbanization and wild-grown corona epidemics. For 20 years, understanding climate change has been a particular contributor to sustainability thinking. It is becoming increasingly clear that all questions are significantly linked to the objectives of health, as their interface. This results not only from the holistic semantics and anthropology, of the concept of health, but also from the political demand of the WHO to connect all decisions with the consideration of „health in all policies“.

We know that in 2017, 843,000 Chinese died of diabetes. In China, 114 million people suffer from this disease, which is a quarter of the world’s diabetics. Although they make up almost ten percent of the population, only one in three people is aware that they have diabetes. In 2011, 15% of men and 11% of women died as a result of smoking. In 2015, there were 11 dead children under the age of 5 every minute, largely as a result of malnutrition or man-made disasters (wars or plagues).

These are highlights of health problems, which on the one hand cause the most severe human suffering and serious economic damage, but on the other hand are very easy to avoid: because they are almost entirely dependent on behavior: that is, on knowledge and precautions. Nutrition requires access to food or lifestyle skills (sugar consumption, exercise); the inhalation of nicotine depends on meticulously planned market conditions, social acceptance and motivation; Children’s health requires just the most basic support – it develops a natural salutogenesis, under a wide variety of conditions. What these three cases of morbidity have in common is that, like all human behaviors, they are also co-factorially influenced by genetic, cultural and social environmental conditions. Early detection, education, health literacy do not require high investments but structural basic benefits of the social system, which – as can be illustrated by the German federal debates on education and reform or the so-called development aid – is often ideologically conducted against better knowledge. Notably the economy as it is presently designed channels profit into managing disease rather than strengthening health.

In 2020, the world’s leaders have set up a unique global social experiment. To mitigate anticipated consequences of the COVID-19 pandemic, they led to a months-long closure of entire industries and social sectors, without clear evidence. To this end, they invented new definitions of quarantine. In German law, „quarantine“ used to target is specifically ill or specifically suspected, not entire population groups due to blanket risk forecasts. Those in quarantine must be optimally treated with diagnostics and medical care, but not abandoned in euphemisms such as „home schooling“. The balance of health, death and economic outcomes, as well as the secondary consequences for population groups such as children, institutionalized people or precarious workers, are not foreseeable even in the countries of the rich North. What has been done to the less privileged, by weakening the wealthy in their ability to do better, while at the same time not providing aid, but incuring direct damage, in the already dysfunctional areas, shall be accounted for by the evaluation of this vast experiment.

Global Health is an opportunity to take stock, soberly and honestly, at the level of our commitment to dignity, through the WHO’s health standards. It provides a holistic methodology, to take stock of what needs to be done for the purpose of health, in all areas of the world economy, science and social security. That would be the precondition to achieve, what is possible today for the first time: a global strategy for health in the broad sense.

It is not yet clear how good this opportunity is. Judging by the currently visible measures, cash flows, incentives and narratives, it is probably ill: they continue to strengthen the structures whose salutogenic competence, evidently, has reached its limits.

As Wolfgang Schäuble said: „The state must ensure the best possible health care for everyone. But people will continue to die from Corona.“ A healthy society fulfills our responsibility to make this possible with dignity: globally.