A Public Health Emergency of International Concern (PHEIC) is defined in the International Health
Regulations (2005) as “an extraordinary event which is determined to constitute a public health risk to other
States through the international spread of disease and to potentially require a coordinated international
response” (1).

The IHR Emergency Committee convened by the WHO Director-General regarding the outbreak of the
novel coronavirus 2019 in the People’s Republic of China suggested in its recommendations on January 23,
2020, to discuss a reform of the current PHEIC system: “In the face of an evolving epidemiological situation
and the restrictive binary nature of declaring a PHEIC or not, WHO should consider a more nuanced
system, which would allow an intermediate level of alert. Such a system would better reflect the
severity of an outbreak, its impact, and the required measures, and would facilitate improved international
coordination, including research efforts for developing medical counter-measures” (2).

Apart from the necessity to improve the binary decision-making system for a PHEIC on the expert level, the
current media response and level of public alertness clearly demonstrate the need for a new communication
tool, which can easily be updated and used to inform a non-specialized general audience. In previous
outbreaks, similar situations, in which the communication between the authorities involved in the outbreaks
and the media was not ideal have been observed (e.g. SARS 2002/2003, Ebola 2014/2015). These critical
situations were also triggered by semi-informed statements of a range of outside experts, who were not
directly involved in the outbreak response and could therefore not be made directly accountable for their
media activities and the reactions caused by these. In addition, rumors and misinformation appear to spread
even faster than viruses nowadays, leading to fear and overreactions.

Therefore, our aim is to develop a scorecard as a tool to transfer current knowledge, real-time evidence and
the level of emergency in an outbreak situation in an understandable format to decision-makers, the media
and the general public.

• This scorecard could also be used to continue the discussion on the IHR reform to include a multi-level
system in case of a Public Health Emergency of International Concern.
• One of the main objectives is to keep this scorecard as simple, but objective and informative as possible
while easy to understand for a lay audience.
• A slightly adapted version will be developed for a specific national context (e.g. outbreak situation in
country A, risk assessment for country B) as risk assessments vary a lot for individual regions and countries
and are essential for objective risk communications.
• Please note: As this scorecard is in its initial phase of development, we would like to invite everyone to
provide us with feedback and suggestions, including research evidence, to build up a strong argument for
a multi-level PHEIC system and to make this scorecard a valuable tool for decision-makers, the media and
the general public as soon as possible. 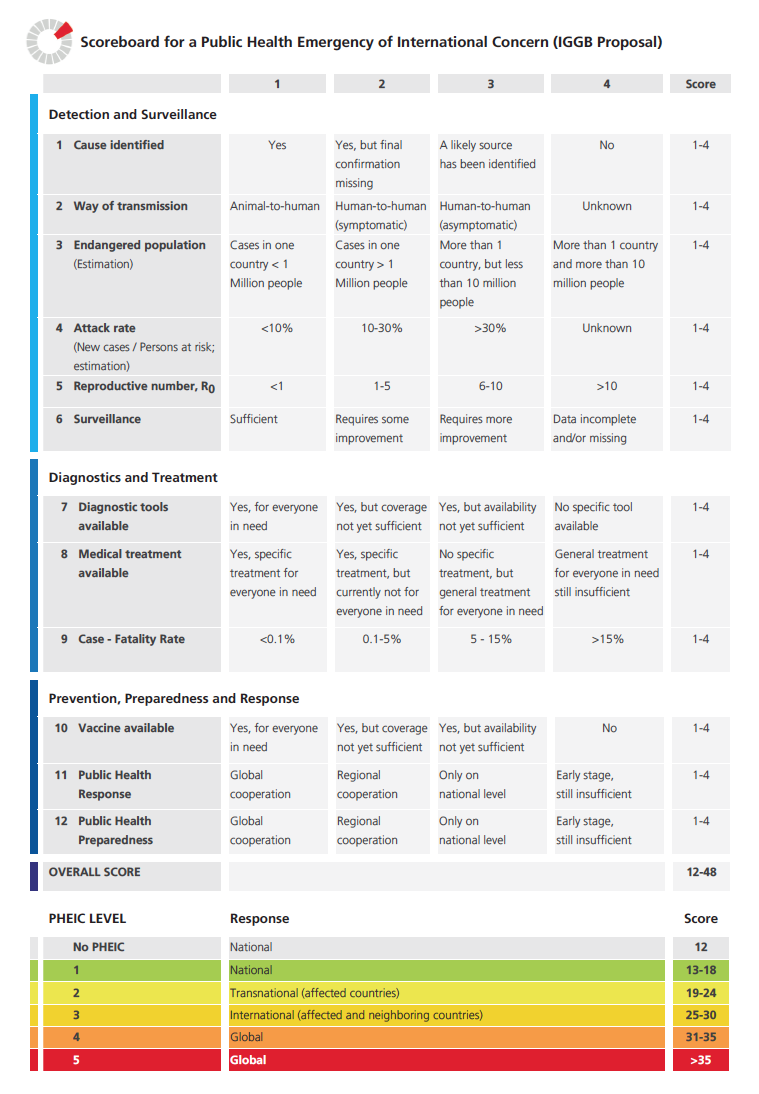 These are current examples based on a quick web-based search. More research and a thorough analysis on an on-going basis are required here. In addition, for this initial proposal we have rated all indicators with the same value. Depending on a range of determinants and taking the dynamic of an outbreak into consideration, the respective value of each indicator needs to be discussed on a regular basis. 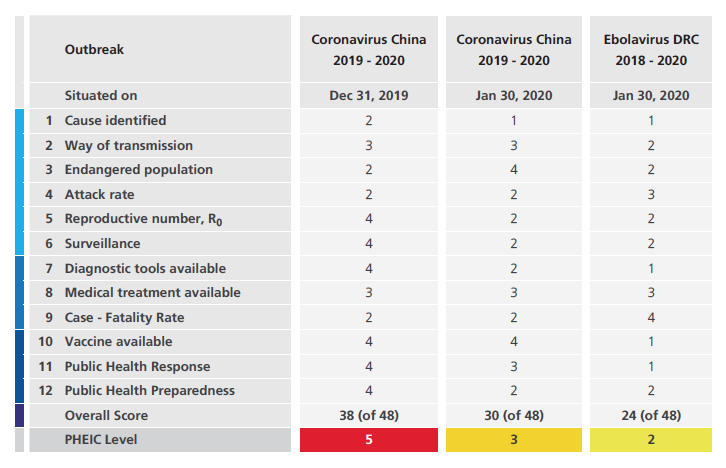 Please note:
As this scorecard is in its initial phase of development, we would like to invite everyone to provide us with feedback and suggestions, including research evidence, to build up a strong argument for a multi-level PHEIC system and to make this scorecard a valuable tool for decision-makers, the media and the general public
as soon as possible.
Please send your feedback to:
mathias.bonk@igg.berlin