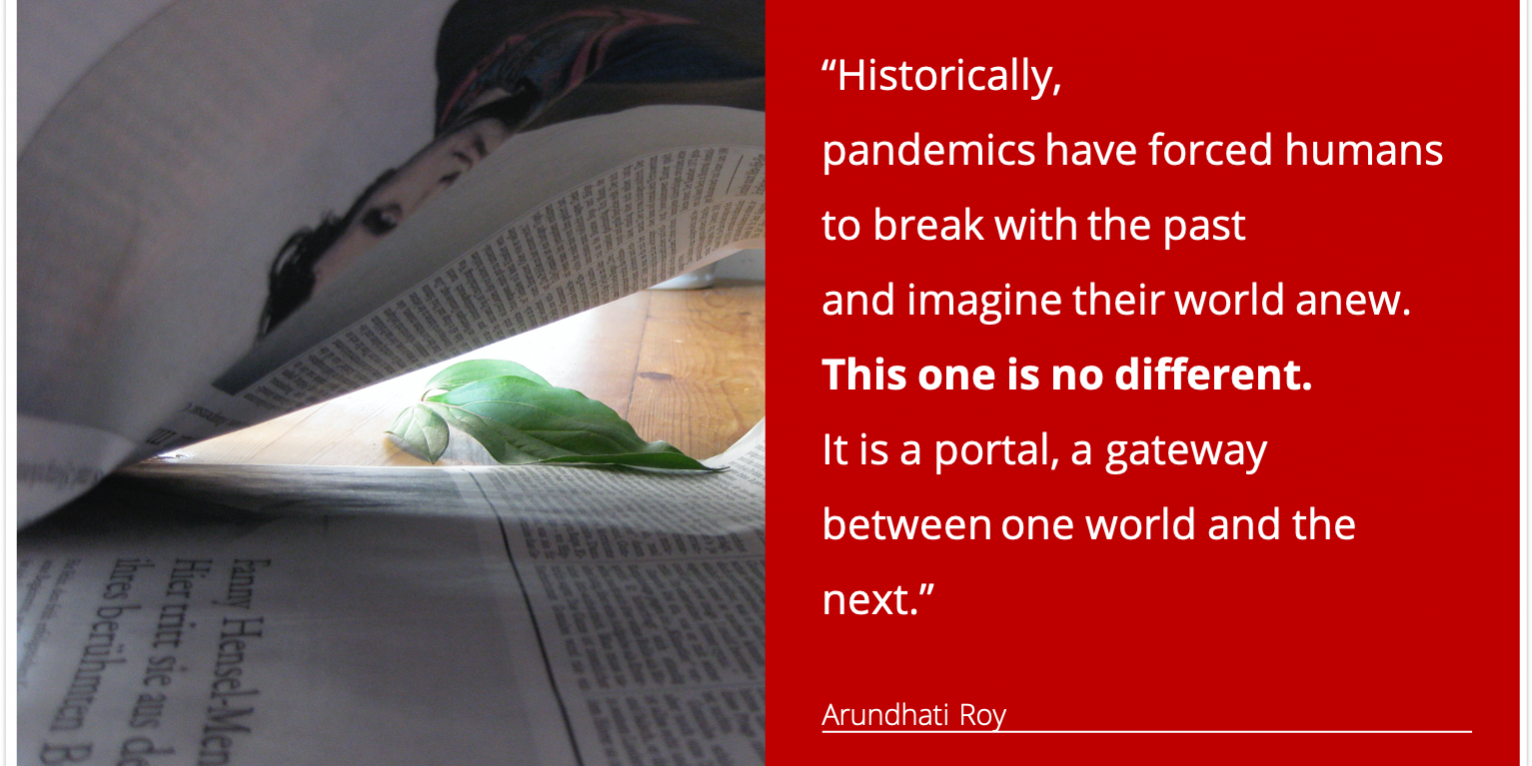 Planning for tomorrow and the world we want

According to the Indian writer Arundhati Roy “The pandemic is a portal” and a “gateway between one world and the next”. Her recent article in the Financial Times (full text available here, to be read, free of charge) is based on the situation in India but this idea could be interpreted in many ways. It has a lot of different meanings for different people and in the context of whole societies and the entire global community.  Which world would we be leaving behind? Which path do we need to take and how do we want our new world to look like?

The current state of the world

Taking a path through a portal means leaving our current world behind us: a world which is in a really bad shape – a world of inequality, inequity, poverty, climate change, environmental destruction and loss of biodiversity, food insecurity, social discrimination, capitalism and populism, terrorism, never-ending wars and endangered human rights…and the current pandemic.  Strangely enough the temporary side effects of this pandemic are actually quite positive – natural resources are not being exploited as fast as usual, leading to a later “Earth Overshoot Day” this year. This Earth or Country Overshoot Day (COD) is calculated by the Global Footprint Network marking “the date when humanity’s demand for ecological resources and services in a given year exceeds what Earth can regenerate in that year”. For Germany, for example, this should have been yesterday, May 3rd and it means simply that for the rest of 2020 we are living at the expense of the environment and directly, and indirectly, at the expense of billions of other people who live in poor countries. Furthermore, we ought to be aware that in many ways the wealth of the rich is based on the health of the poor. There are many examples for this: multinational companies who don´t pay the minimum wages, health insurances or pension contributions for their employees, use tax havens, receive crisis support from governments and still pay dividends to their stakeholders. At least some countries, like France, Denmark and Poland have now started to halt bailouts for tax-haven companies. Other European countries, such as Ireland, play a “central role in the tax avoidance” of incredibly rich multinationals such as Apple, Facebook, Google and Microsoft. Luxemburg has also helped Amazon to avoid taxes by granting the company undue tax benefits against the EU state aid rules. Apart from this, Luxemburg’s Country Overshoot Day is February 16, with only Qatar´s being earlier (February 11).

During this acute phase of a pandemic we shouldn’t be wasting time pointing fingers, instead we all ought to be trying to “work together crossing party or religious lines”. This thought was emphasized by WHO´s Director General, Dr Tedros, early in April in his response to the criticism of the current President of the USA. Disregarding the early advice of the World Health Organization, he has halted essential WHO funding in the middle of the worst pandemic in decades. In addition he has reduced the support for other multi- and bilateral health programs, sidelined the Center for Disease Control and Prevention and suggested a number of dangerous therapies. He has put the lives of thousands, probably millions, in danger not only in distant countries but also in his own country. Many countries have been shaken by the pandemic and are increasingly struggling to balance the different needs and demands of their populations with limited resources, reinforced by a global “lockdown”. Arundhati Roy´s home country, India, announced the lockdown to its 1.3 billion people just 4 hours before it came into force. India is a very large and diverse country and has been in a difficult situation politically and economically ever since its independence in 1947. Nevertheless, during this present crisis, it has managed to keep the COVID19-case numbers relatively low. In her article, Mrs Roy describes the early response in her country and many of the challenges facing hundreds of millions of people, especially the poor. The widespread poverty has led- indirectly -to a more environmentally friendly lifestyle of the majority of the population, making India one of the few countries without a national “overshoot day”. Indians are also known to be more resilient to crisis situations and skilled in solving day-to-day problems by uniting their families resources and capabilities.

According to Dr. Tedros Unity is the “only option“ in in the fight against COVID19. Not only during this pandemic crisis, of course. However, the pandemic has been “over politicized” at the cost of global and national public health organizations, by a growing number of mainly non-democratic governments, by some political leaders focusing on their election campaigns, and by several populist movements. Most of them are trying to hide their own mistakes and failures in the past and during the current crisis, not only in the field of health (SDG3), but many other fields of development, which the pandemic now makes even more visible.

New estimations show that the current crisis could lead to about 500 million additional people living in poverty (SDG1). The Executive Director of the World Food Programme (WFP), David Beasley, warned last week that the world would be facing “multiple famines of biblical proportions” that could result in 300,000 deaths per day — a “hunger pandemic” (SDG2). This might even be triggered by environmental hazards, such as the devastating locust invasions in Eastern Africa, Yemen and Pakistan (SDG15). Global school closures in response to the pandemic also present an unprecedented risk to children’s education (SDG4), protection and well-being. Gender equality (SDG5) is also at risk as women, representing about 70% of the global health and social sector workforce and the majority of care takers for children and the elderly, may be exposed to increased discrimination as well as reduced access to sexual and reproductive health services. The access to clean water for drinking and handwashing as well as a safe sanitation infrastructure are as important as ever (SDG6), similarly the increased need for affordable and clean energy (SDG7). To reach decent work and economic growth (SDG8) by 2030 will be even more difficult as COVID19 is expected to wipe out an equivalent of 195 million jobs, according to the International Labour Organization (ILO).  However, the pandemic could also lead to opportunities in several fields, such as a more resilient infrastructure, the promotion of an inclusive and sustainable industrialization and (digital) innovations (SDG9), more responsible production and consumption (SDG12) and a trend towards more sustainable cities and communities (SDG11). In our globalized world with its migrating workforce this would certainly require the reduction of inequalities within and among countries as well (SDG10).

Many of these goals appear to be unreachable at the moment. Unprecedented things do happen though, and the current situation is showing proof of this in many different ways. The pandemic “offers us a chance to rethink the doomsday machine we have built for ourselves” says Arundhati Roy. It is “a time to save the sick and rescue the planet”, as the NY Times headlines an opinion article by António Guterres, Secretary General of the United Nations. The mission of the UN is to be the world authority not only for strengthening peace and justice (SDG 16), but also for securing closer cooperation among nations to stop global threats, such as a pandemic faster and to slow down others, like climate change (SDG13) as much as possible. The UN Agenda 2030 and the 17 Sustainable Development Goals were designed to transform the world as our current way of treating it, is far from sustainable. In 2019 the Earth Overshoot Day was July 29, meaning we would need 1.75 earths to survive, if we continue living as we do now. The European Overshoot Day in 2019 was even as early as May 10. Therefore it is more than obvious that the European Commission and the EU Member States need to take even greater responsibility for the rest of the planet, not only during this pandemic e.g. by today´s Coronavirus Global Response Pledging Conference, but also by strengthening multilateralism as well as the means of implementation and revitalization of global partnerships for sustainable development (SDG17). To find our way towards and through the gateway into the “next world” (Roy) that the Corona pandemic has opened up for us, we probably need to update our chosen roadmap. For example, by adding a few goals taking current developments and the situation of migrants, refugees and asylum seekers as well as other vulnerable populations much more into account. This will be essential on our never-ending pathway to ensure healthy lives and to promote well-being for everyone of all ages (SDG3).

The Failure of Schools under Covid-19 Policies in Germany
5. Januar 2022