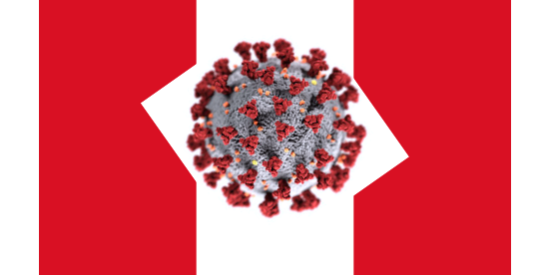 An insight into the impact of COVID-19 in Peru

Declared as the second hotspot in the Americas after Brazil, Peru is battling to control the COVID-19 pandemic which has already led to almost 200.000 confirmed cases and more than 5.000 deaths. The government of President Vizcarra had responded rapidly by closing international borders and implementing strict lockdown measures which have now been extended until the 30th of June 2020.

To further flatten the curve, a decree was issued to divide people’s movements outside their private homes by gender. Only men were able to leave the house on Mondays, Wednesdays, and Fridays and women were allowed outside on Tuesdays, Thursdays, and Saturdays. No one was allowed to be outside on Sundays. Striking here is the disregard to the needs of the transgender community and the assumption of gender equality in the functioning of everyday life. This ignorance led to transphobic violence, when for instance three transgender women were forced by the police to declare “I want to be a man, I want to be a man”. The latter finally contributed to the ceasing of this policy. Nevertheless, the practice of social distancing turns out to be a difficult exercise for Peru’s urban poor. According to a 2018 government survey, 44 % of households do not have a refrigerator, needing them to leave the house regularly to access food. Supermarkets are usually more expensive than traditional food markets and during lockdown, massive queues in front of supermarkets discouraged people even more from shopping there. Consequently, food market halls have become a major hub for infections, where health authorities conducted COVID-19 rapid diagnostic tests with traders to contain infections.

Like in many countries across the world, lockdown measures have caused economic devastation. To counteract these developments, the Peruvian government has approved a budget of 26 billion US$ to support small and micro enterprises, also in the widespread informal economy. In addition, the government has approved approximately 3 billion US$ for direct transfers to support vulnerable households during the national isolation period. Unfortunately, these transfers did not include various vulnerable groups such as indigenous populations, members of the LGTBI community as well as families in the north of Peru who have been also affected by El Niño for the past three years.

The Peruvian capital Lima accounts for half the country’s GDP, which is one major pull-factor for the rural population to migrate to the city. Most of these internal migrants work in the informal sector, which accounts for 73 % of employment in Peru. The continued lockdown presents an economic disaster for the many who now have no income during this pandemic. Unable to pay their rent or even after being evicted from their homes, hundreds of migrant workers decided to return to their Andean and Amazon regions of origin using the only means of transportation available: their own feet. The people forming this heterogenous group named Los Caminantes started their route walking the Pan-American Highway, and are more frightened of starvation than of the virus itself. Seeking refuge in their communities and families, they turned out to become a key factor in the vast spread of the virus. By May 2020, even remote indigenous communities reported 350 deaths. Los Caminantes encountered acts of solidarity on their way back home, where residents would come out to donate food and water. However, some receiving municipalities and communities tried to stop the returnees’ entry by firing gunshots in the air, fining them, forcing them into self-isolation or even by destroying the roads to access their communities. And those who make it back to their communities find themselves confronted with similar situations of poverty to those they had left behind in the first place.

Despite these various measures and the already devastating impact of the COVID-19 outbreak, Peru still has not reached a plateau of infections. The country’s underfunded and fragmented healthcare system is faced with an utmost challenging exercise: The supply of drugs for treatment is limited and basic laboratory tests are lacking. Several private clinics are making profits on this situation and have charged more than 100 US$ for a COVID-19 test which were supposed to be provided and processed free of charge by the State. Another factor adding to unequal access to healthcare is the geographic distribution of health workers across the country. While the city of Lima and coastal areas have the highest densities of health workers, other areas, such as the northern departments like Piura (9.6/10000), Lambayeque (10.7/10000) and Loreto (10.8/10000) having the lowest. And on top of the devastating impact of COVID-19, these under-staffed regions are also struggling with an outbreak of Dengue at the same time. As both diseases show similar symptoms, such as fever and muscle pains, it complicates the diagnostics, which could lead to a delay and further spread of both viruses.

After many economic reforms, which were predominantly pro market, Peru has experienced one of the highest growth rates in Latin America during the last decades. The country had increased its public investment in water, sanitation and electric power. And even now, Peru enacted one of the biggest stimulus packages across South America. But it is unlikely that the latter economic trends will be continued with the expected recession hitting the country and the region. The pandemic has yet to be stopped, not only because it poses a threat to the health of the population, but also because it is reinforcing long existing social inequalities in Peru. Across Latin America it is to be hoped, that this global health emergency will lead to states strengthening their health systems to promote the health and well-being of their populations, rather than to risk to deteriorate into an authoritarian leadership as for instance in Brazil.

Ernesto Lembcke graduated from the London School of Hygiene and Tropical Medicine with an MSc in Public Health. After working as a health promoter in Mozambique and Peru, he worked for GIZ in Kenya and advised the government on health policy issues. He currently works for the International Organization for Migration in Berlin.

The promise and perils of future health technology
25. Januar 2023

Intercultural health: what we overlook in health care for indigenous peoples. Reflections from Peru
6. September 2022